Ski, eat, read, repeat. That has been Hubby’s mantra for weeks now. He skis daily, sometimes with a friend, sometimes with me, most often alone. On track-set trails, on lumpy skidoo trails, on no trails at all. I tell you, that man is a force of nature. At 76 years of age he shows no inclination to slow down. He says he doesn’t have the strength he once had, or the endurance. But I sure can’t tell. To me he is the expert on staying fit as we age. And on surviving winter. And I’ve been looking to him for inspiration for years.

That’s not to say that Hubby has floated his way through his sixties and seventies in perfect health. Since I retired in 2013, he has had open-heart surgery, two hernia operations, and a complex operation to try to repair a shoulder injury incurred while playing hockey. Each time, he grumbles and predicts the worst. He’s not a Pollyanna like me.

But he always, always works arduously at whatever rehabilitation he needs to do. And eventually he bounces back. He gave up hockey because to not do so would be foolhardy. You can’t control what others are doing on the ice, and one collision could result in a fall that would reinjure his shoulder. The surgeon said that a reinjury would not be repairable. So he sacrificed hockey to ensure that he could still carry his canoe, play golf, wield the chainsaw. And ski. Seems like a good trade-off to me.

Aging is a slippery slope for us all. But that doesn’t mean that we shouldn’t try to hang onto whatever is important to us, as long as we can. Hubby knows he’s been lucky. Even in the midst of his bad luck he acknowledges that it could have been worse. But he gets angry when people tell him to relax, slow down, put his feet up. When he saw the surgeon about his shoulder, the doctor first asked Hubby how old he was; then he said due to Hubby’s age he was reluctant to operate. Hubby explained how active he was and how important physical activity was to him. But the doctor merely launched into a lecture on how lucky Hubby had been to have been able to play hockey, and canoe, and ski as long as he had.

Ha. That did not go over well. Hubby lost his patience and shot back that of course he knew he’d been lucky, but that he’d also been “busting his ass for years to stay fit, and that wasn’t luck.” You know, I’ve always thought maybe that burst of temper was what persuaded the doctor to go ahead.

So yeah. He’s been pretty inspirational for me. I work hard at my own fitness, if only to be able to keep up with him. And even though I am a couch potato at heart, I’ve become pretty diligent in my fitness routine over the years. I’ve learned to set reasonable goals for myself, and stick to them. And that’s partly because Hubby has always been my biggest fitness cheerleader. Of course I should go to the gym, he’s always said. Or go for a walk, ski, ride my bike. When I was working, the first question he’d ask when I came home at the end of the day was if I’d been to the gym. I wrote a post about that a while ago, all about trying to ignore the siren call of the couch. Especially in the winter. And how Hubby’s nagging is my secret fitness weapon. Ha.

A few years ago when I was struggling to stay motivated, he fashioned a wooden lectern that fit onto my exercise bike to allow me to better entertain myself and thus stay on the darned thing longer. So now I listen to my audiobook and scroll through Pinterest on my iPad, then I read my book for a bit, then plug my headphones into my iPad and watch YouTube videos. And I need to do these things. I can’t stand exercise for exercise sake. If I am distracted, I can walk or pedal forever. And if not, I count every step, every revolution.

Hubby’s dedication to exercise and getting outside every day is his secret to surviving winter. If it weren’t for his persistence in getting me out on the ski trail with him, I’d miss out on beautiful winter days like last Sunday. Sunny, -8°C, with no wind. And the snow. The snow was soft, and new, and eminently ski-able. Perfect for kicking, and perfect for gliding. What a wonderful ski we had. Across the golf course near us, up a hill and back through the farmer’s fields beyond. Blue, blue skies, and perfect snow.

That was not the case earlier in the week when we packed a lunch and set off early for a woodland park, with groomed cross-country ski trails, about a 50 minute drive away. At first the trails were wonderful. We chose our route from the big map board at the first intersection, and shushed away. At every intersection, where one trail crossed another there was a big signboard and a picnic table. Our chosen route would take us about an hour and a half, Hubby estimated. We’d eat our lunch after we skied. That sounded perfect to me.

We were able to ski side-by-side much of the way and fell into talking about trips we’d been on, and favorite travel memories. Our top five favourite day trips, top five most scary roads we’ve driven, top five favourite people we’ve met in another country. Time sped by unnoticed. Until I began to get tired. Quite tired, in fact. We’d been skiing way longer than we should have been. We checked the signboard at the next intersection. What? We still had kilometres to go. Hubby tried to persuade me to sit on the picnic table placed near the signboard for a minute. But I was afraid that if I sat down I’d never get up. So we stood for a minute and then carried on.

Then fate intervened, as fate is wont to do. The sun disappeared, the trail was in total shade, and the ski conditions changed abruptly. I had lots of kick, but absolutely no glide. None. Usually when cross-country ski conditions are good, you kick and pole, then glide for a second or two, then kick and pole again. You get into a rhythm, and can cover many more kilometres of trail with less effort. The precious second in between each kick and pole allows you to rest a bit.

But when the conditions changed that afternoon, I lost all of my glide. I muscled my way along the trail. Poling and kicking hard and feeling as if I were skiing on velcro. I was sooo tired. And getting crankier by the minute. Hubby switched over to my track to ski in front of me, hoping to smooth the track and give me at least a bit of glide. And he was annoyingly chirpy, trying to distract me from my fatigue with conversation. “So, which trip in the last five years is your favourite, Suz?” he asked. “I don’t KNOW,” I barked. “I do not have the energy to think or to talk.” He said nothing after that. And we carried on. At one point my right hip began to throb. “Oh, crap,” I thought. “That’s all I need.”

Than just as abruptly as before, the ski conditions changed again. Suddenly my glide was back. I kicked and poled and was able to benefit from my effort with a beautiful long glide. Oh, it was heaven. Skiing was immediately easier, faster. And thirty minutes later we reached the car. I was freaking exhausted. I’m sure I looked like a damaged ship limping into port. But I made it.

I was tired, and thirsty, and starving. I tell you, that egg-salad sandwich tasted like the food of the gods. Hubby apologized and said he’d miscalculated the time it would take us to do the route. Our ninety minute ski had turned into almost three hours. I haven’t skied that much in one go since the last time we skied in Algonquin Park years ago. And back then we stopped for lunch at the halfway point. On the drive home, Hubby was full of admiration for my doggedness. “You did really well, Suz. I’m pretty tired too.” Well, that was high praise indeed.

When we arrived home, and changed out of our ski gear, I was so ready for my reward for all my hard work. I put on the kettle and started the fire in our sun room, where I retreated with a cup of strong tea, for a half hour of quality book time, and a long, luxurious nap. Later I woke up when the sun was setting and the snow on the river was that odd shade of almost blue. I heard chopping sounds in the kitchen and knew that Hubby had arisen from his own nap and was starting dinner. That’s my favourite time of day, you know, lying on the couch in the sunroom, in the dying light, pretending to still be asleep, and listening to the sounds of Hubby cooking.

Ski, eat, read, nap. That’s Hubby’s routine, and mine too when we ski together. Ski, eat, read, nap. It’s a pretty good formula for surviving winter. Especially a long winter, during a pandemic. The difference is of course that he will get up tomorrow and do it again. And I won’t. Ha.

You know, as I said before, aging is a slippery slope. For all of us. It’s hard, as we age, to hang onto aspects of ourselves that we value, whatever they are. And we all need a cheerleader sometimes to motivate us. Someone to get us off the couch. To get us out the door. And to give us permission to choose to do something for ourselves, for our own wellbeing. Instead of something that we feel obliged to do. Like work, or taking care of others.

That’s why Hubby always asked about my going to the gym when I came home from school. He knew that if I got stuck into marking or admin work after school was out, I’d end up not going. And he thought that work, while important, was not as important as my staying fit and healthy. So he gave me an excuse in a way. I knew he’d ask if I’d been to the gym. So I always went.

I guess he’s not only my inspiration for surviving winter. He’s my wellness conscience. Ha.

What about you my friends? Do you have a wellness conscience? Or a cheerleader? Not just for surviving winter, but for helping you to choose to do something for yourself? If not, maybe we can be cheerleaders for each other. 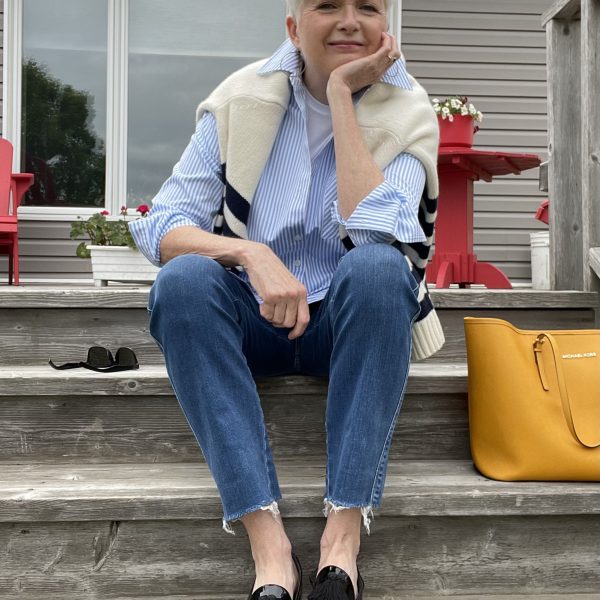 I’m on the loose in loose shirts this week, my friends. Looking for easy, comfortable ways to wear my new oversized striped shirt. 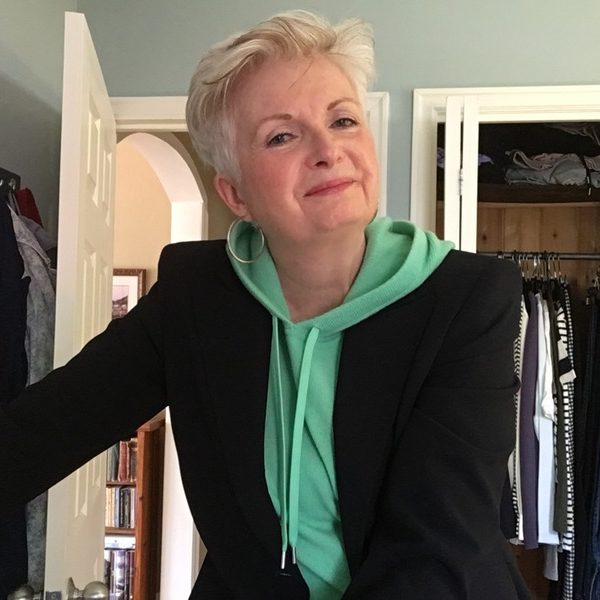 Spring is here and I’m doing my spring closet switchover this week. Swapping my winter clothes for my spring ones. Such a satisfying activity. 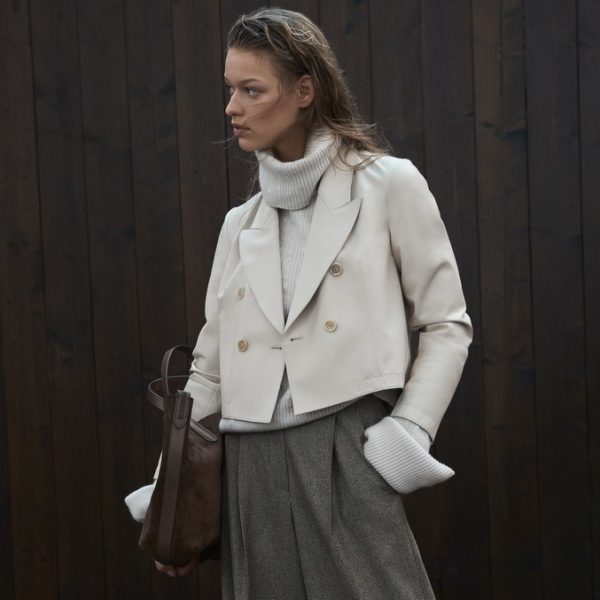 I’m musing about fall 2020 this week. About crisp mornings and cool evenings. About new fall clothes and old friends.