Not Just Sittin’ Around, Grace.

I’m retired from teaching as most of you know if you read this blog regularly. And if you don’t, well… I’m retired, as I said. And Grace Coddington is not.

I retired three years ago after thirty years in the classroom. My career was a mix of day to day supply work to get my foot in the door, a few years teaching adults, then twenty-four years teaching teenagers at secondary schools in the Ottawa area, the last thirteen of them as department head. Teaching for me always meant being fully immersed in school life: running the school newspaper, sitting on or chairing school literacy committees or board-wide assessment and evaluation committees, organizing school professional development days, or presenting at them. Yada, yadda, yadda. I’m not trying to make myself sound self-sacrificing, here. I love to talk, I thrive on change, and I hate to be left out of anything. So being part of the committees that made the decisions which drove change was mostly a selfish move on my part.

I loved my job. But teaching is stressful, and the planning, prepping, researching, seemingly endless meetings, constant professional development, not to mention the hours and hours of marking each week, can expand to fill as many hours as you let it. And if you want to do the job right, it will. Expand to fill all your time, I mean. The idea that teachers’ work hours are the same as students’ classroom hours is a myth. Big time.

So when I was eligible to retire, I thought long and hard about what to do. I still loved my job. Still had tons of energy for the classroom. But what I was finding I did not have any energy, or enthusiasm for was the constant change. The new initiatives that successive governments mandated, throwing out the old curriculum or methods, that we had sometimes barely implemented, let alone had time to assess, and bringing in new ones that were supposed to solve all the problems in education.

I made the actual decision to retire one evening in May 2011, when I arrived home for supper at 7:00 pm, after a four hour meeting at school during which the “leadership team” discussed “new” initiatives for the following school year. Then after dinner I marked. May is a big marking month and, with two senior classes that semester, I couldn’t afford to take a night off. It was late. Hubby was in bed reading. I was sitting at my desk, with big tears rolling down my face and dripping onto some poor student’s final creative writing project, when something clicked in my brain. “I can’t do this anymore!” I yelled to Hubby. “I need to decide tonight when I will retire.”

So that night Hubby and I set aside my marking, and using the Ontario Teachers’ Pension Plan website, we looked at scenarios. How much pension could I expect to bring home if I retired the next year? How much if I waited for two years? And we decided that I would quit at the end of the following year. And, you know, once I knew the end was in sight, I went happily back to my marking. In the end I worked an extra semester. I resigned my headship in June 2012, and worked part time for one more semester teaching in a new program that we had been implementing. And I officially retired at the end of January 2013.

Now, I don’t want you to get the idea that Hubby and I had not planned for this day. That I just decided to retire out of the blue that May evening. Financially we’d been preparing for this for years. Even when I worked teaching adults in the early years, and made about 40% of the salary I would make in a regular high school, I started putting money into investments. Hubby was a very good influence on me in that way. He’s not just a pretty face, you know.

So…. anyhoo. As I said, I’m retired at 59, and according to fashion news sources Grace Coddington, long time Creative Director for Vogue, at 74, is not. I read in an article on the Business of Fashion website that she’s stepping down as Creative Director. She is still planning to do several fashion shoots for Vogue each year, but is freeing herself up to do other things. And as she very emphatically puts it, she is “definitely not retiring” because she doesn’t want “to sit around.” Uh. Okay.

I’m actually a big fan of Grace and her work. I’ve seen “The September Issue” twice, read her memoir, and I swear I can tell if a fashion shoot in Vogue is one she has styled. She’s one of a kind, for sure. But I had to smile ruefully at that comment she made about retirement and sitting around. Actually, my friend Elizabeth and I had a good laugh together about it one night at dinner. I said that when I was trying, through umpteen e-mails, to organize lunch with a group of retired teacher friends, I’d frequently receive a reply…”Sorry can’t make it on the 12th.That’s my week for sitting around.” Of course, I was joking. Trying to find a date to get all those ladies together is Iike herding cats… man.. they are busy people!
Sitting around is not my definition of retirement, nor is it what defines the lives of my retired friends. In fact according to a July 2015 article in the Montreal Gazette, by Donna Nebenzahl, sitting around is exactly what most retired people do NOT do. Dorothy Bye, who has a PhD in psychology and is an expert on aging says that “contemporary retirement takes all kinds of forms.” She uses terms like “hybrid,” “partial,” and “bridge retirement” to describe how retirees are fashioning all manner of combinations of work and non-work. Full-time short term work, part-time work, or even starting entirely new careers, what she calls “encore careers.” Byers says:”retirement is not resignation, it’s regeneration.”
According to Gillian Leithman, a corporate trainer who specializes in preparing workers for retirement, many people begin to define success in entirely different ways when they approach retirement. That “meaning replaces money.” And of course finding just what will provide that meaning is not necessarily easy; you don’t just walk away from work and into a meaningful and fulfilling retirement. It takes work to fashion your life after work, so to speak. And according to Byers it’s creativity, and being adaptive, that will help determine if you’ll find happiness in retirement.

After three years, I’m still finding my feet with this retirement thing. In many ways I miss the classroom. Not the marking. Not the stress of parent-teacher interviews, especially dealing with the parents of a struggling student. Nor the stress of trying to support teachers in my department who were dealing with difficult situations, inside and outside the classroom. I don’t miss the tedium of those necessary, but boring, board-wide committee meetings. I do miss the excitement of working with the teachers in my department, my peeps as I called them. Getting excited about ideas, building a program we were proud of, sharing the joys and the stresses of day to day life in the classroom. And I miss the kids. The energy of the classroom. The whole performance thing. Because in many ways teaching is performing, holding an audience, getting them on your side. Kind of like stand-up comedy, some days.

I remember a conversation Hubby and I had two or three years before I retired. We were camping, and one night around the fire, sipping wine and waiting for supper to cook, I started talking about my impending retirement. I think I was almost grieving over the fact that my career was winding down. That something which was so integral to my identity might soon be done. Who would I be when I wasn’t Ms. Burpee anymore? And I remember saying to Hubby…”I can’t believe that it’s almost the end.” And he replied, “Why not look at it as a beginning, instead of an ending?”

And just like that. My perspective changed. That doesn’t mean that all my anxiety disappeared, or that tears were not shed when I walked away from JMSS. Or that I didn’t struggle to find my path. But it does mean that I started looking ahead, and not back. I am a change junky, after all. And retirement is one change that I certainly don’t regret making. And what with skiing, and cycling, and walking, and skating, and canoeing, and travelling I haven’t been sitting around much. Well, except for when I’m reading, or drawing…. or blogging.

Now back to Grace Coddington and her throw away comment about retirement, and sitting around. If you look at what the experts say about contemporary retirement, at what hybrid, and partial, and bridge retirement looks like. Not to mention those “encore” careers. It kind of looks as if, despite her protests, that retiring is exactly what Ms. Coddington is doing. But…sshhhhh…don’t tell her I said that.

What about you, dear readers? Are you closing in on retirement? Does the prospect of life without work make you nervous? Or are you already there? Any advice or enlightenment you can share with the rest of us? 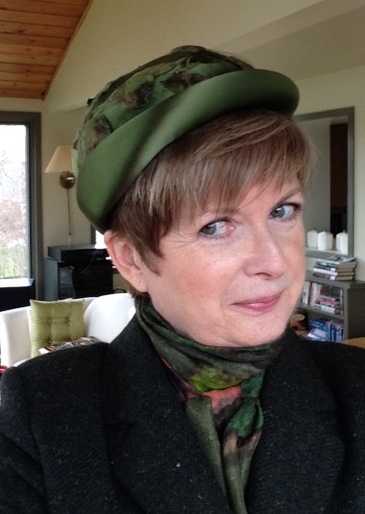 I still have vintage on my mind these days. I’m still trying to get lots … 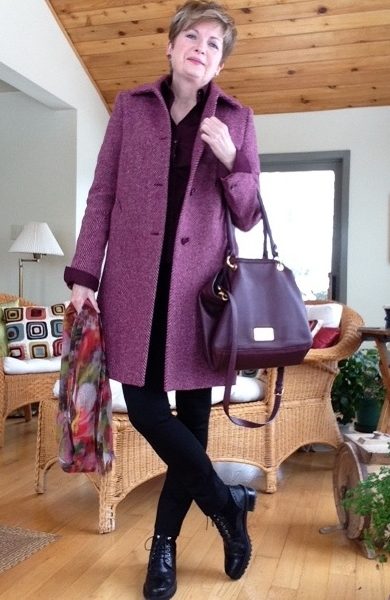 As Long As You’re Dressed For It

Winter has come, folks. Mother nature threw us a curve ball yesterday, and suddenly our … 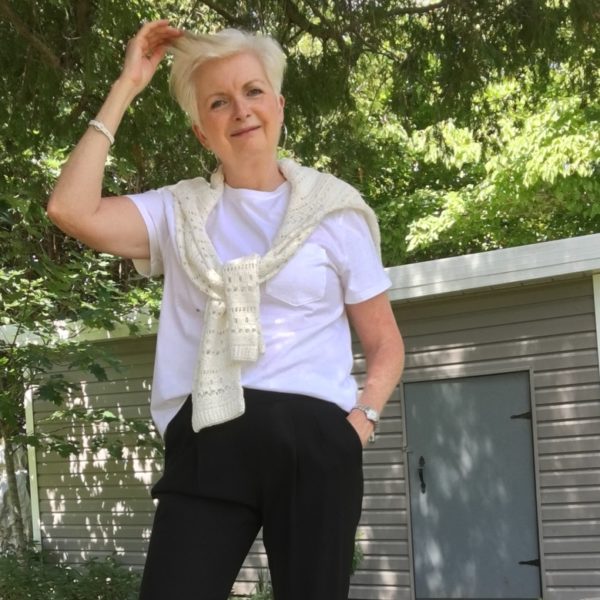 Closet Editing During a Pandemic

I’m editing my closet this week my friends. Because I found a new closet editing system on YouTube. Oh, I do love a good closet cull.

PrevPrevious storyTelling Your Inner Critic to Shut It.
Next storyFifties GirlNext

33 thoughts on “Not Just Sittin’ Around, Grace.”