Into The Woods… Of Winter, Logging, and Bologna Sandwiches

We’ve had snow again these last couple of days. Not a lot. But enough to cover up the ice on the trails. And definitely enough to go skiing. I love a sunny, crisp winter’s day.

And being in the woods in the winter, always reminds me of my brief career as a logger. Okay, so, not exactly a logger, more of a logger’s helper. Kind of. Let me explain.
When we first moved to the farm, after my mum and my stepfather married, I was entranced by everything. The farmhouse, the brook, the hills and fields, the treasures I unearthed in the old cellar or under the woodpile behind the barn. I wrote a post about that a year or so ago; you can read it here, if you’re interested.
Our farm had, like many farms, a large woodlot. And my stepfather worked in the woods, for a few weeks each winter, cutting logs, some for firewood for the kitchen wood stove, and some to sell.
He loved to be in the woods. Especially in the winter. Especially with his horses. Usually he would harness Myrt to the sled… that’s her on the left… she was lovely, wasn’t she… and he’d set off early in the morning, for the whole day. Returning in the late afternoon dusk, in time for supper.
That first winter after we moved to the farm, when my stepfather came home from the woods, I’d quiz him at supper about his day. Where had he cut? How did he get Myrt to help drag the logs? What did he do at lunchtime? And his stories of the day caught my imagination. How he had built a big fire, and kept it going all day. How, when he stopped to have a bite to eat, he’d sit down on a log and get warm at the same time. How he boiled some snow in a kettle on the fire and made a pot of tea. All these details stirred my little romantic heart.
“Wouldn’t it be good,” I asked my stepdad, “To have someone to tend the fire and make the tea?” And, of course, he allowed as how my services would be indispensable. So, I awoke early the next morning, donned my step-brother’s one-piece snowmobile suit, and set off with my stepdad for a day in the woods.
We had a lovely day that I have never forgotten. We built a fire. I added scrap wood to keep it going all morning. Sometimes I held the horse when he needed to be doing something like shifting a big log, and rolling it onto the pile. At noon we boiled water for tea. I have never drunk tea that tasted more wonderful. He said it must have been the ashes that blew into the open pot. Then we opened the packet of sandwiches that Mum had made for us. Homemade bread, bologna, and cheese. He showed me how to take a forked stick, place the sandwich across it, and toast it over the fire. They tasted wonderful too. And after lunch he cut a few more logs, Myrt pulled them into the small “yard” he had cleared, and I helped pile them. And then when the shadows fell across the track, we headed for home. He hooked Myrt up to the sled, and stood with the reins in his hands, urging her along, and I sat on the back of the sled and tried to stay awake.
I must have told an enticing tale at supper of our day in the woods: the sunshine, the fresh air, the fire, the tea and toasted sandwiches. Because the next morning, my stepbrother, two years younger than me, who had been born on the farm, and had previously viewed logging with a certain amount of disdain, as just something his dad did every year, and not how he wanted to spend his school holiday… had a change of heart. Afraid that he’d been missing something all along, he was awake before me, and sitting in the kitchen wearing his snowmobile suit, all ready for a day in the woods, when I came down for breakfast. Looking back I’m sure my parents must have been quite amused by the sudden popularity of logging in our house.
I used to love to listen to my stepfather tell stories of working in the woods when he was young, big gangs of men lived all winter in the bush, housed in shanties, cutting all day. I remember drinking tea one Sunday afternoon and listening as he and our neighbour told of working in the backwoods of Maine one winter. And of the time the cook quit half-way through the cutting season, and my stepdad had to stand in temporarily. No small feat keeping fifty men fed, the secret apparently being beans, bacon, and biscuits. What? No toasted sandwiches over the fire?

The men would cut all winter and pile the logs, and then in the spring, there would be the drive. Logs sent downstream on creeks and rivers swollen from the spring run-off. Floated downstream until they could be gathered in huge booms, and lashed together into rafts, and thus continue further downstream to the mills. I remember as kids we even learned to sing a song in school about the log drive…”Down, down, the river Saint John… something, something.”

It was a dangerous business working on the log drive. The shot below is of a small fenced graveyard that Hubby and I discovered one summer when we were fishing on the Bonnechere River, in Ontario. Not far from the banks of the river, it’s surrounded by encroaching bush and seemingly forgotten. According to local history, it marks the graves of several log drivers who died one spring in the 1890’s. Their names are not recorded.
And have a look at this little film created by the brilliant people at the Canadian National Film Board. They really do make the best animated short films in the world. I’ve been singing the song on my head for days. The music is by Canadian singing sister duo Anna and Kate McGarrigle. If you get a chance check out more of the McGarrigle Sister’s work. I love them. Sadly Kate died in 2010.

So now, whenever Hubby and I are out in the woods in winter, part of me really wants to build a fire, toast some bologna and cheese sandwiches, and put the kettle on for tea. But I usually settle for a thermos.

What about you dear readers? What memories does a sunny winter day conjure up for you? 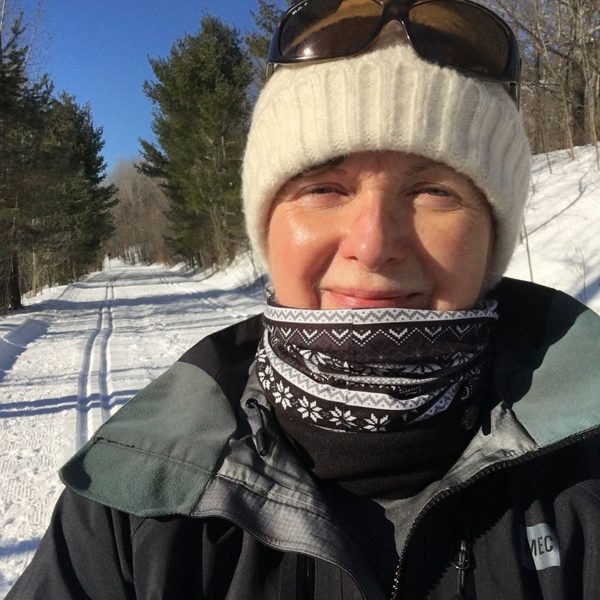 Ski Chic or Not

For someone who loves clothes and make-up, and who stresses over my hair, I’m strangely not worried about being ski chic, or not. 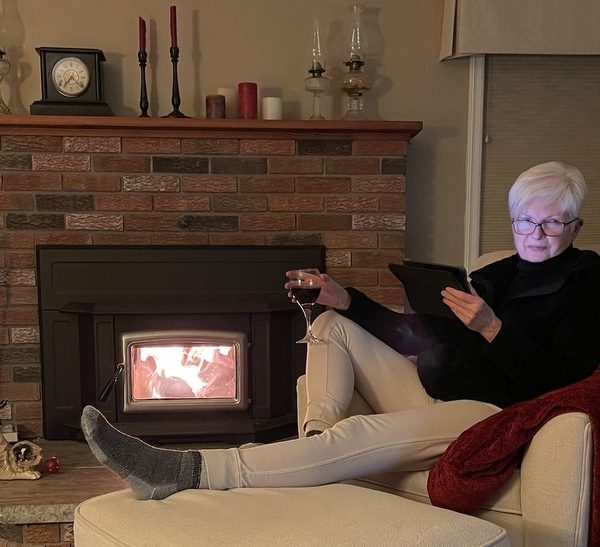 Reading By the Fire

I have a dream of reading round the fire with all my book-loving friends, real and virtual. And then sipping wine and talking about books. 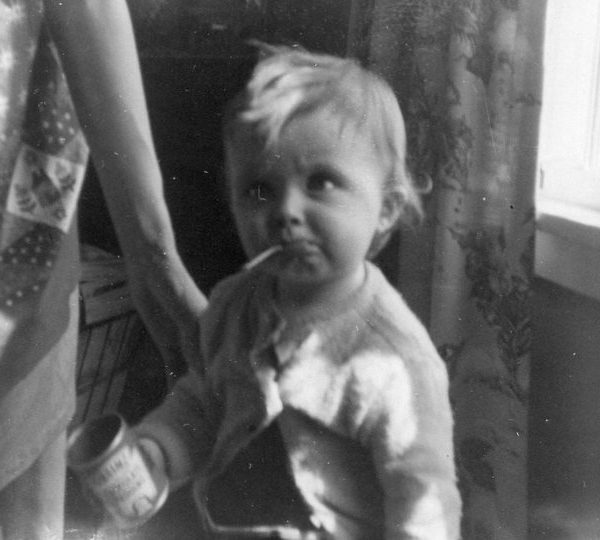 On Being Sick … and Reading in Bed

I’ve been sick this past week with a killer cold. Thank god for reading in bed, is all I can say.

PrevPrevious storyWhen We Were Grown-Ups … or… Adulting Is Hard
Next storyMidwinter Mitford Madness…. AgainNext

32 thoughts on “Into The Woods… Of Winter, Logging, and Bologna Sandwiches”